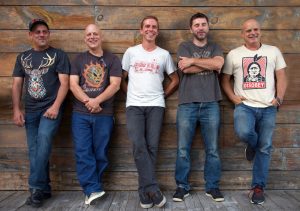 We are very excited about our new release, Live At Club Helsinki, which drops next month! It captures both sets of a very magical evening in 2012 at one of our favorite venues to play. We’ve been playing at Club Helsinki since 2001, back when it was in Great Barrington, MA, and the Hudson, NY location is awesome. Being treated so warmly and mixed so well, combined with a great line-up of John Medeski, Duke Levine, Brahim Fribgane, Mister Rourke, Mike Rivard and Dean Johnston (w/ Thomas Workman sitting in on flute) made for some great music, and we’re eager to share it with the world. Here’s the official press release for the album: 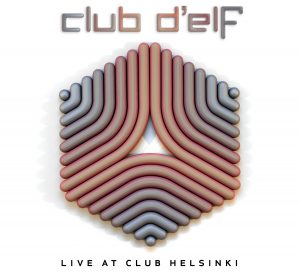 Boston-based, Moroccan-dosed dub-jazz collective Club d’Elf celebrates the release of Live At Club Helsinki, an epic double album that showcases the band’s genre-leaping improvisational acumen, performing at one of its favorite venues for an ecstatic crowd. Featuring keyboard wizard John Medeski (employing an arsenal of analog instruments including a vintage Mellotron) the music visits touchstones as disparate as Studio One, John Cage, Gnawa and drum’n’bass. The band’s association with Club Helsinki dates back to 2001, and a combination of superb sound, intimate environment and an audience tuned into the band’s every nuance helped create one of those magical nights. Live At Club Helsinki captures the excitement of two complete continuous sets of no-holds-barred improvisations and classic D’Elf tunes. Street date: January 10, 2017 on Face Pelt Records.

Disc one starts with the free jazz opening of “Mogador” (featuring a volcanic Medeski solo on grand piano), and segues seamlessly into a cover of The Gaylads “Africa” (driven by Duke Levine‘s rootsy Telecaster), the music shape-shifting in a way that is free-flowing and never contrived. “The Booloolu” is based around a Moroccan 12/8 cha’abi groove, which the band has absorbed to such a degree that it elicits a rousing response whenever native Moroccans are in the audience. Brahim Fribgane shines on South American cajon, before switching to oud for his composition “Hegaz”, based on a traditional Arabic scale. The band’s music has been called “the music of dreams” (Boston Globe), and here the dream continues its inevitable flow, as the band moves into the prepared-bass-driven hip-hop of “Secret Atom.” This track showcases the wizardry of Mister Rourke, whose rock steady beat-matching and ability to pitch samples into the key of the song, set him apart from ordinary DJs. The band closes the first set with “Berber Song”, derived from the Amazigh people of Morocco. Blistering solos from Levine and Medeski on B3 take the band into an Allman Brothers-go-to-North Africa zone, closing with a sample from one of the band’s major inspirations, neo-psychedelic avatar Terence McKenna.

Derived from ancient sources, trance forms the central core of the Club d’Elf aesthetic, unifying the various genres the band has absorbed. That influence – notably the Moroccan variety – is evident on disc two, beginning with a tribute to the late Maalem Mahmoud Guinia. On tour in Morocco in 2009, Rivard befriended the maalem, who was one of the most revered of the Gnawa, a mystical brotherhood of trance-healers. He taught Rivard the Gnawa song, “Zeed Al Maal”, with the version played here driven by Fribgane‘s vocals, and Rivard’s commanding playing of the Moroccan sintir, a camel-skin-covered bass lute. “Power Plant” follows, with Levine adding a James Bond–esque melody over a sintir-propelled rhythm. Rourke drops another McKenna sample, and the band flows into “Salvia” and “Green Screen”, dance-floor-filling electro-jams fueled by Medeski’s funky clavinet. Fribgane’s oud and vocals are featured on the last tune, “Sidi Rabi”, which closes the set on a spiritual note.

Formed in 1998, Club d’Elf‘s music draws from a startlingly wide spectrum of styles, including jazz, Moroccan Gnawa, hip hop, psychedelia, electronica, avant garde and dub. Circling about bassist/composer Mike Rivard (Morphine/Either-Orchestra/Boston Pops Orchestra) and drummer Dean Johnston, each Club d’Elf performance features a different line-up, drawn from a constellation of some of the most creative improvisors from the jazz, DJ, rock & world music scenes of Boston and NYC, creating a unique experience for audience and musicians alike.

Informed as much by sci-fi writer Philip K. Dick’s ideas of shifting reality and parallel universes as by Miles Davis & Fela Kuti, the band draws inspiration from many sources, including the avant comedy of Firesign Theater and Mr. Show. Guitars, turntables, Fender Rhodes, laptops, horns, tablas and all manner of exotic instruments flow in and out of the mix, along with guests including Marco Benevento, Billy Martin, Ryan Montbleau, DJ Logic, Mark Sandman (Morphine), Hassan Hakmoun, Marc Ribot and Skerik. The band is equally at home playing late-night festival sets for the rave/Burning Man crowd as it is for a predominately Arabic audience in traditional garb as boundaries melt away and all are drawn into the intoxicating power of the D’Elf groove. The group’s bi-weekly residency at the Lizard Lounge in Cambridge, MA is the stuff of legend and provided a laboratory for its improvisational style to emerge and develop. Its latest studio CD, Electric Moroccoland/So Below, drew glowing reviews from PRI’s The World, Voice Of America, and Afropop Worldwide for its bold synthesis of Moroccan traditional music and electronic, dubbed-out funk, rising to #1 on the Relix chart. The band made its debut in South America this year, performing at Ecuador Jazz 2016.

“One of the most inventive and ever-changing bands in all of new jazz. There is simply not another band like Club d’Elf on the planet.” – Russ Davis, Jazz America